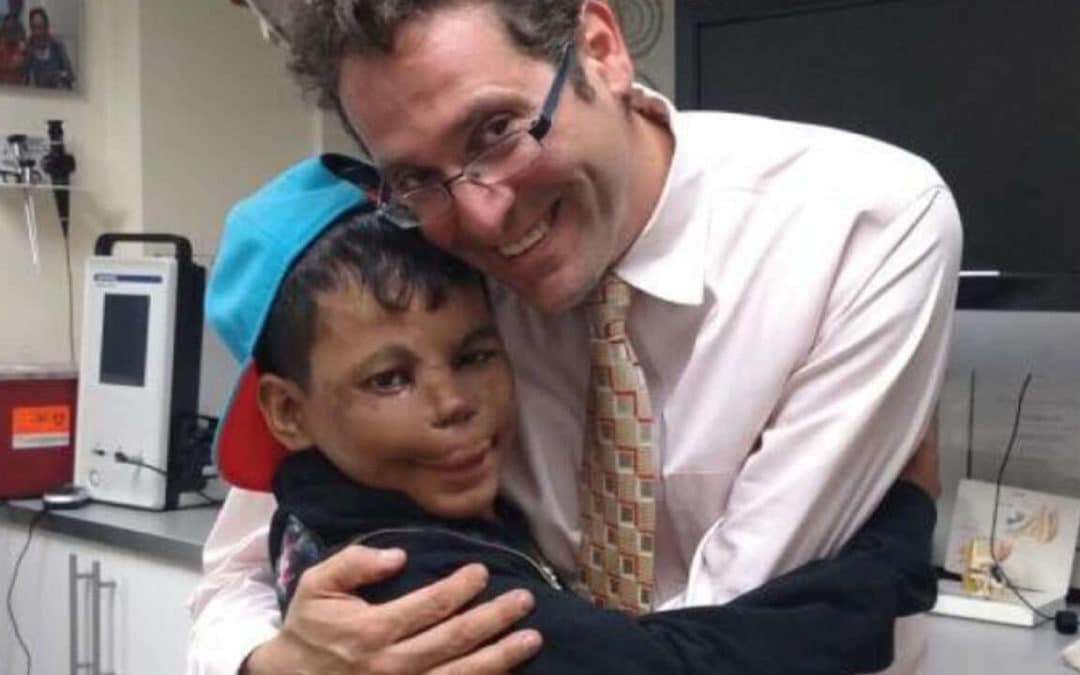 While it is difficult to lose any part of your body, the psychological impact is devastating when it involves a part of the face, such as the nose.  Just ask Dallan Jennet. Dallan’s face was disfigured at the age of 9 after he fell out of a tree onto a live power line, severely burning his entire face and losing his nose.  At the time, Jennet was so embarrassed by his face he refused to go to a local hospital to meet Dr. Tal Dagan, an Associate Adjunct Surgeon at Mount Sinai Hospital’s Division of Facial Plastic and Reconstructive Surgery. So, the doctor traveled to the boy’s remote location in the Marshall Islands to see if there was anything that could be done. “I explained that it would be a very long road of multiple surgeries,” Dagan recalled. “I would have to borrow skin from his forehead. He was still on board because he really wanted his nose back.”

Jennet’s path to a new nose started in early 2015, with the first of six surgeries in the Marshall Islands, where expanders were placed under the remaining skin of his nose to make room under his skin for the new nose to be implanted.  Dr. Dagan and a team from Oxford Performance Materials, Inc., a leading advanced materials and 3D printing company, created a 3D printed facial device that would replicate a natural nose in appearance and functionality. Unlike a standard implant, the device was created using sample models taken from the noses of the patient’s close family members to recreate the most natural and culturally appropriate graft. It also allowed the surgeons to rehearse the complex procedure and create a custom operation to minimize complications.

Now 15, Dallan flew halfway around the world to New York City for the opportunity to live a normal life with the help of Canvasback Missions, Inc., a nonprofit organization that brings health care and health education to the Pacific Islands. During the 16-hour surgical procedure at New York Eye and Ear Infirmary, Dr. Dagan and Dr. Mashkevich utilized a new laser-based technology to scan the surface of the patient’s face and visualize the blood vessels feeding his skin to help determine if the skin was healthy enough for reconstruction. With tissue and blood vessels harvested from Dallan’s thigh, the surgical team removed large amounts of scar tissue, inserted the graft, and reconstructed the skin over the 3D printed nose implant. They performed four additional surgeries and follow-up outpatient exams. The result was a full reconstruction of Dallan’s nose, with his senses of smell and taste restored. The implant is permanent, flexible, and will not need to be replaced as he continues to grow. “We believe that this procedure will allow the patient to live a happy and productive life,” says Grigoriy Mashkevich, MD, Assistant Professor of Otolaryngology, Division of Facial Plastic and Reconstructive Surgery at Mount Sinai Hospital. “We also hope that this approach will be a viable option for others with severe facial deformities, such as war victims who require reconstructive surgery. This procedure may be a breakthrough in facial reconstruction because the patient will never have to deal with the standard issues of transplantation, such as tissue rejection or a lifetime of immunosuppressive therapies.”

Since Dallan Jannet received the first 3D printed nose implanted in the United States, 3D printed patient-specific models have emerged as a useful new tool for planning and carrying out rhinoplasty, considered one of the most challenging procedures in plastic surgery. Rhinoplasty – sometimes called a “nose job” or nose reshaping – is one of the most frequently performed types of cosmetic surgery. About 219,000 rhinoplasty procedures were performed in the United States in 2017, according to ASPS statistics.

Patient-specific, life-sized, 3D-printed models can provide a useful visual reference in the operating room for plastic surgeons performing rhinoplasty, according to a special “Ideas and Innovations” article published in Plastic and Reconstructive Surgery authored by Bardia Amirlak, MD, FACS and his colleagues at the University of Texas Southwestern Medical Center in Dallas.   According to the authors, “Patient-specific 3D printed models reflecting the actual 3D anatomy provide additional visual and tactile information to the surgeon which may contribute to achieving the desired clinical result.”

3D printed models can be instrumental in enhancing patient communication according to the authors. “It is another additive tool for patients to understand their surgical outcomes,” comments Dr. David H. Song, a plastic surgeon and former president of the American Society of Plastic Surgeons. “In the right setting with the right educational material, it just enhances the doctor-patient relationship. It gives a starting point for a richer discussion.” Dr. Neil Tanna, a plastic surgeon in New York, adds, “You basically print out the 3D photograph into a 3D model and you can use that as a baseline to discuss with the patient.   Instead of pointing at pictures, you can show the exact problem.” Once the patient and surgeon agree on the “idealized outcome” of rhinoplasty, the digital images of the patient’s current appearance and simulated outcome can be converted into 3D printed models. “The tactile feedback and ease of visualization from different angles and profiles have complemented the 2D and 3D photographs, making the surgical possibilities and limitations of the procedure easier to understand for the patient,” according to the team at University of Texas Southwestern Medical Center in Dallas.

But the benefits do not stop there.  In the operating room, they can provide a guide to the surgeon. The surgeon can refer to the 3D printed models as a “side-by-side reference,” to ensure that the outcomes of cosmetic rhinoplasty are as close as possible to the planned appearance of the patient’s nose.

The team from University of Texas Southwestern Medical Center in Dallas conclude, “Given the complexity of rhinoplasty, 3D printing may be a natural fit as part of the surgical care of these patients” improving the preoperative consultation process and providing a guide to the surgeon during the procedure. The use of 3D printing technology is being advocated by many members of the American Society of Plastic Surgeons to guide surgeons and patients towards more accurate and satisfying results in cosmetic surgery.