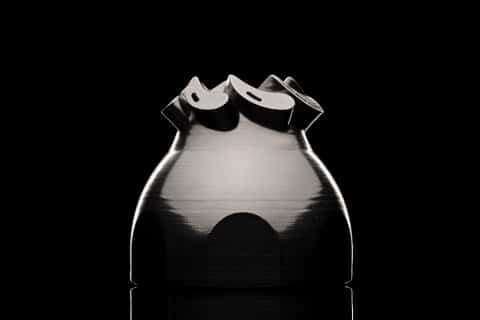 TULSA, Okla. & BURLINGTON, Mass.–(BUSINESS WIRE)–True innovation can often come from the places you least expect. For more than 90 years, John Zink Hamworthy Combustion (John Zink) has operated on the outskirts of Tulsa, Oklahoma, building emissions control and clean air combustion systems, which production facilities around the world depend on to meet or exceed emissions standards. The company custom engineers burners, gas recovery and vapor control systems for a wide variety of energy, petrochemical and manufacturing customers. John Zink is a globally recognized leader in this space, but 21st century emissions problems require 21st century solutions.

“By eliminating the need for hard tooling with the Studio System, John Zink engineers have been able to produce innovative new parts, reproduce parts for which tooling no longer exists and find creative solutions to improving their workflow”

To help their customers meet rigorous environmental and efficiency standards, John Zink, a part of Koch Industries, recently invested in metal 3D printing technology from Desktop Metal to create parts that are engineered-to-order and optimized for each customer’s specific application.

Engineered-to-order parts can be game changers when optimized for specific applications. Global leader in emissions control and clean-air combustion, John Zink created a radical new fuel atomizer design using metal 3D printing that features sweeping, airfoil-like fins. Per ship, the new atomizer could save companies between $90,000 and $160,000 in fuel costs annually, and be produced in few days. (Photo: Business Wire)

After several months of working with the Desktop Metal Studio System, the world’s first office-friendly metal 3D printing system for rapid prototyping and low volume production, the companies today are sharing early results of the new additive manufacturing technology, which include:
– Quick turnaround aftermarket replacement parts;
– The ability to test different iterations of prototype designs faster;
– Eliminating the need for casting tooling, saving both time and money because parts can now be printed in-house; and
– Freedom of creating part designs that cannot be manufactured by traditional methods and can only be 3D printed.

“Our primary goal at John Zink is to custom engineer new systems that eliminate waste so our customers can operate safely and efficiently,” said Jason Harjo, Design Manager, John Zink. “Additive manufacturing rewrites the book on what is possible from a design standpoint, and working with Desktop Metal allows us a very low-cost entry point into the technology. The versatility of the Studio System has enabled our engineers and designers to find both applications for the technology as well as design and performance benefits we hadn’t even considered.”

As a leader in developing innovative solutions to reduce emissions,John Zink has long understood that using atomizers to improve the fuel-air mix inside burners is one easy way to help customers minimize their environmental footprint. Using the Studio System, the company’s designers and engineers were able to prototype and test a variety of options before ultimately creating a radical new design featuring sweeping, airfoil-like fins. The geometric freedom of 3D printing even allowed them to reconsider the shape of the holes – instead of drilling round holes, the part is built with flat openings to improve atomization and increase burner efficiency.

Where the previous design was able to reduce fuel use to 120 kilograms per hour, the new design cut fuel use to just 38 kilograms per hour. With three burners per ship, the environmental impact across an entire fleet can be huge. The savings can be equally significant – per ship, the new atomizer could save companies between $90,000 and $160,000 in fuel costs annually, and can be produced in few days for less than half the cost of a traditionally manufactured fuel atomizer.

A key component in the efficient operation of industrial burners, burner tips are used to control the injection of fuel into the combustion chamber, or as atomizers, mixing fuel with an atomizing medium like steam to increase burner efficiency. The burner tip – originally cast and post-processed via CNC machining – was first manufactured 30 years ago, and the tooling used to produce it is no longer available. Because the part is too complex to machine as a single component, manufacturing spare parts using traditional techniques would require large investments in both time and money. Instead, John Zink engineers looked to 3D printing to produce a cost-effective replacement burner tip. Using the original engineering drawings, they modeled the burner tip and printed the part on the Studio System.

The finished part was produced in just weeks – as opposed to months – and cost significantly less than a cast part – just a few hundred dollars versus a few thousand dollars.

A useful tool found in many machine shops, laser cutters can make precise cuts in a variety of materials. The challenge for John Zink engineers was the cutter’s nozzle could become clogged or slag could build up on the edges of cut parts, requiring labor-intensive post-processing.

The solution they found was to use the Studio System to design and print an entirely new nozzle, one that incorporates a series of internal channels to direct high-pressure nitrogen gas across the cuts and blow away slag, preventing clogs and ensuring cleaner cuts. The complex geometry of the new nozzle could only be made using additive technology, and was printed in metal after an earlier version – printed from PLA plastic – melted at higher temperatures.

Additive technology has helped John Zink engineers recreate legacy parts and redesign existing parts, as well as helped them find creative solutions that improve how they manufacture those parts. Designed by a machinist with three decades of experience at John Zink, these handles were created to make it easier to lift and place heavy tools in a lathe, and were printed using the Studio System after the initial parts – printed in plastic – broke.

The handles were printed rather than machined to minimize waste – each handle would have to be made from a relatively large piece of metal – and to leave machine shop capacity free for customer jobs.

A key piece of safety equipment, shutoff yoke and handles are installed on the USS Blue Ridge (LCC-19), which provides command, control, communications, computers, and intelligence support to the commander and staff of the United States Seventh Fleet. Because no tooling exists for this part, creating them via 3D printing was the most time- and cost-effective option for manufacturing.

For customers, the payoff has come in less downtime – printed parts can be in their hands and installed in days rather than weeks or months – and significant savings, both in part costs, and in fuel, thanks to innovative new designs that can only be manufactured via 3D printing.

“By eliminating the need for hard tooling with the Studio System, John Zink engineers have been able to produce innovative new parts, reproduce parts for which tooling no longer exists and find creative solutions to improving their workflow,” said Jonah Myerberg, CTO of Desktop Metal. “As a result, their team has been able to significantly speed up the design, manufacture and deployment of parts, while saving money and delivering parts faster to customers.”

“The Studio System has proven to be a useful tool for our designers and engineers, enabling innovative new designs for existing parts, the recreation of legacy components and the production of manufacturing aids that improve efficiency,” said Harjo. “As our designers and engineers continue to explore the possibilities of metal 3D printing, they expect to continue to find new applications for the system, whether to prototype new parts or develop new manufacturing aids.”

Based in Wichita, Kansas, Koch Industries, Inc. is one of the largest private companies in America, with estimated annual revenues as high as $110 billion, according to Forbes. It owns a diverse group of companies involved in refining, chemicals, and biofuels; forest and consumer products; fertilizers; polymers and fibers; process and pollution control systems; electronics, software and data analytics; minerals; glass; automotive components; ranching; commodity trading; and investments. Since 2003, Koch companies have invested nearly $120 billion in growth and improvements. For more news and information, visit www.KOCHind.com.

Part of the Koch Industries family of companies, John Zink Hamworthy Combustion develops industry-leading innovations and offers proven emissions control and clean-air solutions to customers around the world. Based in Oklahoma, JZHC serves customers in a wide range of industries, including energy, oil and gas, and petrochemicals, producing everything from burners to gas recovery and vapor control systems. For more information, visit www.johnzinkhamworthy.com.

Desktop Metal, Inc. is accelerating the transformation of manufacturing with end-to-end 3D printing solutions. Founded in 2015 by leaders in advanced manufacturing, metallurgy, and robotics, the company is addressing the unmet challenges of speed, cost, and quality to make metal 3D printing an essential tool for engineers and manufacturers around the world. In 2017, the company was selected as one of the world’s 30 most promising Technology Pioneers by the World Economic Forum, and was recently named to MIT Technology Review’s list of 50 Smartest Companies. For more information, visit www.desktopmetal.com.

* Original Article can be found here