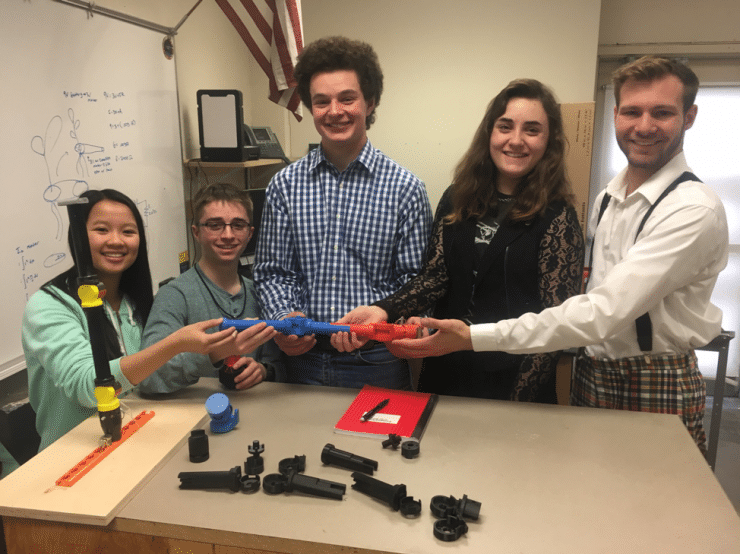 When NASA launched the HUNCH — High Schools United with NASA to Create Hardware — Programs almost 15 years ago, their main goal was to get students who had machining, welding, or other technical skills involved with NASA by helping to create full-size models of actual space station flight hardware to train ground support personnel. It started as a relatively small program, with three schools in two states, and has grown to encompass 117 classrooms in 26 states, and has joined with SME Education Foundation to create a network that helps students pursue their engineering and technology degrees. The design and prototyping HUNCH program features projects that are personally requested by crew living at the International Space Station to help ease living conditions aboard the station. In 2015, Mr. Matthew Brown, a S2TEM Instructor and NASA HUNCH Advisor at Lakewood High School in Lakewood Colorado, heard about the opportunity to design a handle to use while exercising on the CEVIS stationary bike aboard the ISS, he jumped at the opportunity to bring the challenge to his Introduction to Engineering class.

The challenge the ISS crew was facing, using a Bogan camera arm for exercise on the bike, was that the arm, in its current state, could not withstand the stress that the crew put on it during their exercise sessions.  That’s when Mr. Brown’s team put their ideas, and their uPrint Plus and Objet30 printers to work, 3D printing a seat track connection that could ease the issues the ISS crew was encountering when they rode their stationary bike in space.  The students presented their 3D printed solution to NASA, and was asked to come back with some additions the astronauts thought would give the design the flexibility and strength needed to make the handle work exactly the way they needed it to.

After iterating on the prototype design for about two years, the final review date in April 2017 approached.  And while Mr. Brown and his students had access to PLA, ABS and Vero materials in their lab at Lakewood High, the team felt perhaps Ultem, which is a flight ready material, would be the solution to answer the strict criteria set by NASA for the final, space station ready version of the arm.  The team reached out to Stratasys to print the arm on a Fortus machine in Ultem. The versatility of this prototype now provides over 250 adjustment possibilities making it an attractive solution to several other issues the astronauts are facing aboard the ISS, and as it makes its way through the final approval process at NASA, Mr. Brown and his team are excited to hear the fate of this prototype that has the potential to be used by astronauts on the ISS for decades to come.